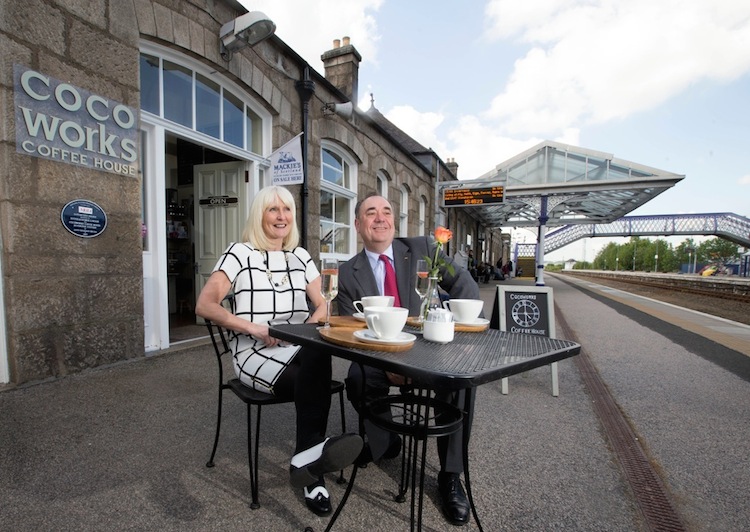 Alex Salmond relaxes on the platform with Jennie Lawson

Scottish First Minister Alex Salmond went to Inverurie station on Monday 19 May 2014 to salute the station cafe which has won a railway heritage award.

Mr Salmond unveiled a plaque at the station to mark the best small project supporters award to Coco Works coffee house which is based there.

The station’s first ever cafe opened two years ago in the former Lord Kintore’s waiting room which had fallen into disuse.

The Coco Works name is a reference to the nearby locomotive works, which was opened by the Great North of Scotland Railway in 1903 and closed in 1968. It is 15 miles from Aberdeen.

Coco Works was the brainchild of owners Jennie and George Lawson, and opened with assistance from ScotRail, the Railway Heritage Trust and the Scottish Government’s stations community regeneration fund.

George Lawson said: “Winning this and other awards has helped us make Coco Works a ‘must visit’ within the Inverurie community.”

Alex Salmond, MSP for Aberdeenshire East, said: “The Coco Works coffee house has been a hit at Inverurie station since its opening in 2012. I have been delighted by its progress in such a short space of time.”

John Ellis of the National Railway Heritage Awards said: “The careful restoration of the original features to blend into the new use of the waiting room makes it a worthy winner.”

David Dickson of Network Rail said: "The trust plays an important role not only in safeguarding the history of our railways but also in recognising the innovative ways in which new life can be breathed into our infrastructure by enterprises like Coco Works."

Information from First ScotRail on behalf of the Railway Heritage Trust.