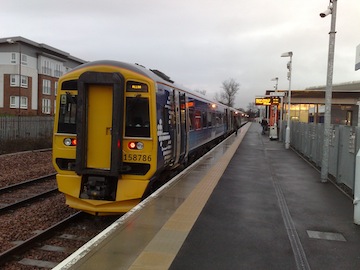 A class 158 train at Alloa in March last year

Recent rail reopenings in Scotland have consistently exceeded passenger forecasts, leading to fears that some schemes have not gone ahead because the consultants have underestimated demand.

This was the message at Railfuture's rail reopenings conference in Stirling.

"The message that came out of the conference is that we're really underestimating patronage," said Jerry Alderson of Railfuture.

Jackie McGuire explained that 85,000 users were expected to use Stirling-Alloa when the business case was prepared, but following the experience of the Larkhall-Milngavie reopening, the figures were revised to 155,000 before construction began.

Once the line was opened, the estimate was again revised, based on the initial patronage, to 400,000, but by the end of the year, that figure had already been exceeded.

“Some of the estimates have been woefully inadequate and potentially schemes have not gone ahead because the consultants have underestimated patronage.” said Jerry.

"Our own experience backs this up. We travelled from Alloa to Edinburgh on Friday night and it was full, standing room only, and our fellow passengers told us this was a regular occurrence.

Geoff Cook of Network Rail outlined its plans for the future. Over the next 15 years NR has predicted that in the Edinburgh suburban area, patronage will increase by 115%, partly arising from work on the Edinburgh-Glasgow Improvement Programme.

Author and lecturer Dr Ann Glen spoke as a campaiger for Airdrie-Bathgate.

She took photographs of the whole period of its construction over less than 24 months and there was general astonishment that an entire railway could be rebuilt in just two years, when people thought it would have taken a lot longer.

Jerry added. “A room full of people, mainly from England, came to find out how the Scots had achieved success and now want to do exactly the same in England.”