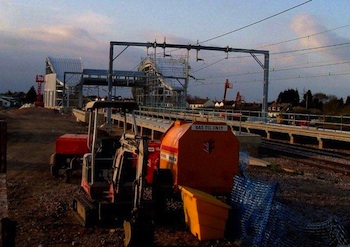 Southend station under construction in 2010

The first public train from Southend Victoria to Liverpool Street is expected to call at the station at 04.05.

Trains to the airport, which is owned by Stobart, are operated by National Express East Anglia. Stobart is providing the station staff.

It will take 55 minutes to get passengers to Liverpool Street and 45 minutes to Stratford, the site of next year's Olympics.

Planning permission for the station was actually obtained from Rochford District Council in 1997. Construction work began in 2009.

Test trains have been calling at the station for a month but passengers were not allowed to get off.

Information from the Southend Echo