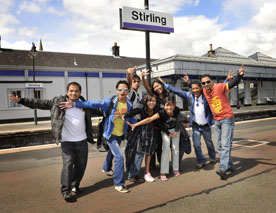 The Nepalese group at Stirling station
Photograph by Seppi Preston

A group of eight Nepalese visitors to Britain were given their first-ever ride on a train, thanks to ScotRail.

The Active Citizens group were on a reciprocal visit to Scotland organised by Future Balance which aims to improve the business skills of community groups and public authorities.

"We have travelled half way across the world to have our first train journey," said Bijay Poudel.

"We are very impressed by all that we have seen and we are very grateful to have had this incredible opportunity."

Train operator ScotRail provided complimentary tickets for a return trip from Stirling to Glasgow which included sight-seeing at the new Riverside Museum, Scotland's museum of transport and travel, which is on the banks of the Clyde.

It includes a 15F locomotive built in Glasgow in 1945 by the North British Locomotive company for South African Railways.

FirstGroup, which is founder patron of the museum, provided the funding to bring the 15F back from South Africa to Glasgow.

John Yellowlees, ScotRail’s external relations manager, said: "We are delighted to have helped make the visit to Scotland even more special with a debut journey on a train.”

Nepal has only one railway, a 40-mile long line from Janakpur and Jainagar. The capital, Kathmandu, has no railway connections at all.