Britain has the fastest growing railway in Europe, as the rail industry and politicians keep telling us. Yes, there are growing numbers of passengers but the network now needs to expand to be more useful. More lines are needed and more stations. Throughout Britain local communities are demanding the return of their lost railway services.

New stations and new lines have been built, with most of the reopened stations seeing healthy growth in passenger numbers. To rail campaigners - including Railfuture members - who remember the 1960s and 1970s, it seems almost miraculous. Back then the future seemed to belong to motorways and air travel, with the railway expected to decline. Not any more.

For most of the stations listed in this edition of Britain's Growing Railways, the passenger usage figures are shown as published by the Office of Rail and Road in 2016. 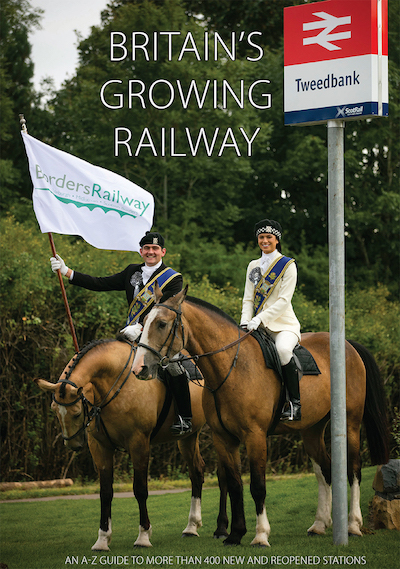 Click on the book cover above to see a full-page version.

In July 2017 Railfuture's re-issued this book listing Britain's railway stations and lines that have opened (or reopened) in the last 50 years. This new issue contains 192 pages updates our previous edition from 2010, which had only 128 pages, not least to give an in-depth description of the dozens of new stations opened in the last seven years. It remains an A5 perfect-bound book and has numerous photos. We initially sold it at the same price of £9.95 despite there being 64 extra pages. However, we have reduced the price to just £5.50 — buy while stocks last!

Like the previous edition, it will be a vital tool for rail campaigners and will shows construction costs, funders, station specifications and facilities provided, with examples of stations and lines where patronage has far exceeded expectations.