If passenger numbers on Britain’s railway are to continue to grow, as they have done for the last 20 years, then it is important that the passenger is at the forefront of any decision making. Rail User Groups and Railfuture, in particular, are eager to help train operators understand passenger needs to create a better passenger experience. The ease of ticket purchasing is important to any journey.

Railfuture’s primary concern is that passengers get the right ticket and that it is done efficiently. Increasingly paying for the right to travel will be done without dealing face-to-face with railway staff but, in reality, the abolition of traditional forms of tickets is more than a decade away. Another reality is that only a minority of stations will be staffed from first to last train and no website, mobile app or self-service ticket machine will ever be designed well enough for a customer to find the best ticket in 100% of cases. Inevitably a proportion of tickets will need to be bought on the train.

One of the reasons why Railfuture supports the train driver doing as much of the train operation as possible is to allow the other on-board staff to focus on passengers.

Railfuture’s Phil Smart, who is a councillor with a transport portfolio, is a daily rail user on Abellio Greater Anglia trains who travels to and from work with colleagues. He sees at first-hand how well, or not, passengers are served.

He explains that Abellio has recently re-equipped train staff on most 'regional' routes with modern hand-held ticket issuing machines and card readers. The old ones didn't always accept all credit and debit cards and certainly didn't do 'contactless' payments, but the new ones support both. At least, they do most of the time.

For passengers wishing to pay using 'contactless' (which is not authenticated against the PIN number entered by the user) it can seem to take forever for the machine to issue the ticket. Regularly the Revenue Protection staff are unable to get round the whole train before it arrives and announcements are made “apologies to those of you to whom I was unable to sell a ticket. Please see me on the platform upon arrival.” On occasion the reason is given “owing to a lack of 4G connectivity in the sticks.” Queuing up is a right pain for anyone hoping to buy coffee before (or even hoping to catch) their connecting train (or bus).

The delays are caused by the attempt to establish a connection to match up the card number with a bank account. It takes some time before it gives up trying to make an ‘on-line’ payment, and will then default to an 'off-line' payment, whereby the train operator takes the revenue risk on the card.

Of course, the machine does not remember that it is having a problem connecting and the same delays are experienced with the next ticket sale when it starts the process all over again. Normal service is only resumed when the train enters an area with a strong mobile-phone connection. A manual override would save time but understandably the operators would fear that staff would continuously use it on routes with poor signals, typically in rural areas.

On longer journeys the delay caused by the technology is not a particular problem but shorter distances, particularly if passenger numbers can be high, it might be quite a problem.  The failure to check the tickets of every passenger potentially creates a haven for fare dodgers travelling between 'pairs' of unstaffed stations especially at peak-time.

One of the reasons for poor mobile network coverage in the UK is that the mobile operators have lobbied heavily against ‘national roaming’, which is available in other countries such as Austria. That would allow the machine to seamlessly connect to another operator’s network if the ’home’ network was not available. Railfuture would encourage the rail industry to lobby for improved coverage – it would also benefit passengers using their smartphones.

Another limitation of the new ticket equipment is that the printer cartridge only has capacity for 50 tickets and will need re-filling en route on a busy football or race day or having sold a couple of group savers.

On 24 September 2016 Railfuture members on a Cambridge-Norwich train heard an announcement from the conductor that because his ticket machine had broken anyone who still needed a ticket would have to buy one upon arrival at Norwich station in order to get through the ticket barriers. Of course, such problems do happen regardless of the technology, but one wonders whether it is economically viable for a standby machine to be locked in the cab in case of such situations. There should certainly be extra supplies of tickets and even ink for the printer.

The good news is that the conductor had obviously phoned Norwich station to warn them of queues, and three people were standing before the ticket gates with portable machines ready to sell as many tickets as needed (see photo below). 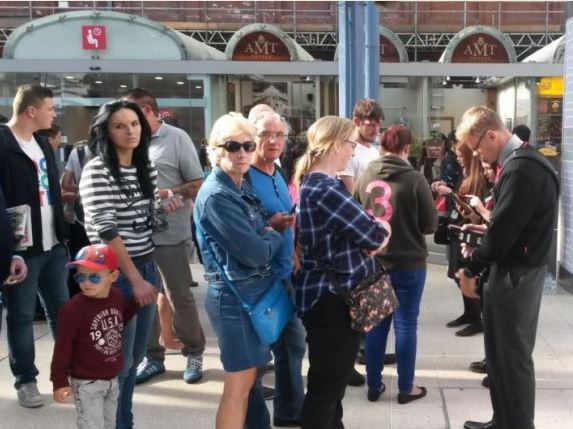 It tends to be the semi-regular user who buys tickets on-board the train. Their prayers might be answered by the introduction of 'carnet' tickets across more of the network.

The railway is introducing a lot of new technology and that is to be welcomed. The issue is not the technology but people. Decisions are taken by management working on the recommendations of people who have done inadequate testing of the technology and have made incorrect assumptions or, worse still, not considered basic issues. Cynics might suggest that the ticket machines were designed by people who work in places where telecoms connection and capacity are more-or-less infinite and everything works perfectly in the lab.

Railfuture is run entirely by volunteers and funded by its many members (click Join). It campaigns to improve the passenger experience on Britain’s railway, especially at stations and on board trains. It is particularly interested in improvements to service quality and resilience along with innovative ideas that can be copied. Feedback can be e-mailed to feedback at railfuture.org.uk.
The photos at the top of the article show the hand-held touch-screen that the ticket-seller user and the equipment that they carry (small photo).The paraphernalia includes a printer for paper receipts (in a separate pouch) and in the main pouch (left to right) a 'chip and pin card reader, ticket printer and another ticket selector.
Read some of the previous articles by this writer: Eurostar's New Trains,  Carlisle Sets Example, Day Ranger Day Out,  Railfuture Gives Evidence,  Prague Compared,  Hopping to Catch a Train, Mountain of Ideas, Sent to Coventry,  Fare Rises - RPI vs CPI,  New Year, Better Railway, Passenger Growth Future?,  Passenger Priorities , Accessible Travel,  Stansted Experience, Widening the NET, Cheapest fares by law?,  Fare Increase Viewpoint and Tube Staffing.