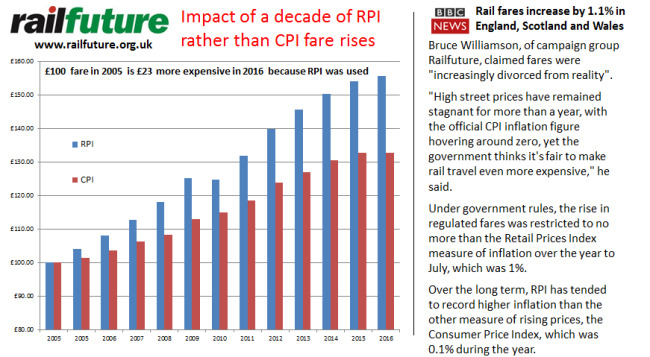 Railfuture succeeded in calling (along with other groups) for an end for RPI+1% fare rises, which were introduced by the government in 2004. Railfuture is now lobbying hard for the government to switch away from the obsolete RPI measurement to the modern CPI inflation figures, which are about 1% lower, when setting the annual regulate fare rises.
For a decade the British government increased rail fares by more than inflation, and argues that they now go up only “in line with inflation”. Given its choice of using RPI in this calculation is not good news for passengers as Railfuture director Jerry Alderson explains in his analysis of fare increases over the last 20 years.

In the days of British Rail it had freedom to set all fares, and often used the tactic of putting up fares most where the overcrowding was heaviest in order to price people off the railway since it did not have the money to provide more capacity (e.g. provide more carriages) and strict control by the Treasury meant it could not borrow to fund expansion that would be recouped in future years.

When the railway was privatised in 1996 the government introduced regulation of a proportion of fares, those deemed essential for passengers, such as season tickets. These are ‘regulated’ fares, and the government set the maximum fare increase that was allowed to protect passengers from abuse by train companies.

Between 1996 and until 1999, regulated fares increased in line with RPI inflation and from 2000 to 2004 actually rose less than it (RPI-1% was the norm).  In those days the government didn’t demand any rises.  However, when the original privatised structure started to fail, with loss-making operators increasingly needing top-up subsidies the government started to increase rail fares, not just setting a maximum increase but, in effect, dictating that passengers must pay more by exerting financial pressure on the train operators through more tightly-specified ‘cap and collar’ franchises.

In 2004 the Labour government’s Secretary of State of Transport, Alistair Darling, introduced RPI+1% fare rises across Britain, and in 2007 he introduced RPI+3% increases for passengers in the South Eastern franchise.

During the life of the Coalition government RPI+1% became politically unsustainable and RPI increases became the norm, with the Conservative election manifesto saying that it would keep to RPI for the five years to 2020. This is a promise that it has kept, but even RPI increases, which equate to inflation plus 1% (as discussed below), are becoming increasingly unsustainable, not just politically but also threaten the continuing growth in passenger numbers seen over the last 20 years.

RPI versus CPI – Government not playing fair with fares

There are many ways that inflation can be measured. The Retail Prices Index (RPI) dates back a century and it has been refined many times. However, each country in Europe had their own incompatible system and so a new, harmonised, measurement called the Consumer Prices Index (CPI) is used by the UK government as its official measure. In March 2013 the UK Statistics Authority and Office of National Statistics declassified RPI as a 'national statistic'.

RPI is now barely mentioned, except when determining the increases in regulated rail fares demanded by the government and written into franchise agreements as it is in effect income that the government will receive. When it comes to paying out, such as benefits, tax credits, public sector pensions and the state pension, it uses CPI.

So what? Well, RPI is almost always higher than CPI, typically 1% higher. Pensioners have not been concerned because of the 'triple lock' guaranteeing them a minimum increase of 2.5%, but other rail passengers (especially those relying on it to get to work) have seen much higher fares because RPI has been used instead of CPI. This is something that Railfuture has highlighted each year, in its calls for fares to be based on CPI instead (read Press release January 2016).

Effect of RPI rather than CPI fare increases on rail fares

The following graphics produced by Railfuture (also downloadable as a PDF) shows the effect that 12 successive fare rises based on RPI rather than CPI have had. 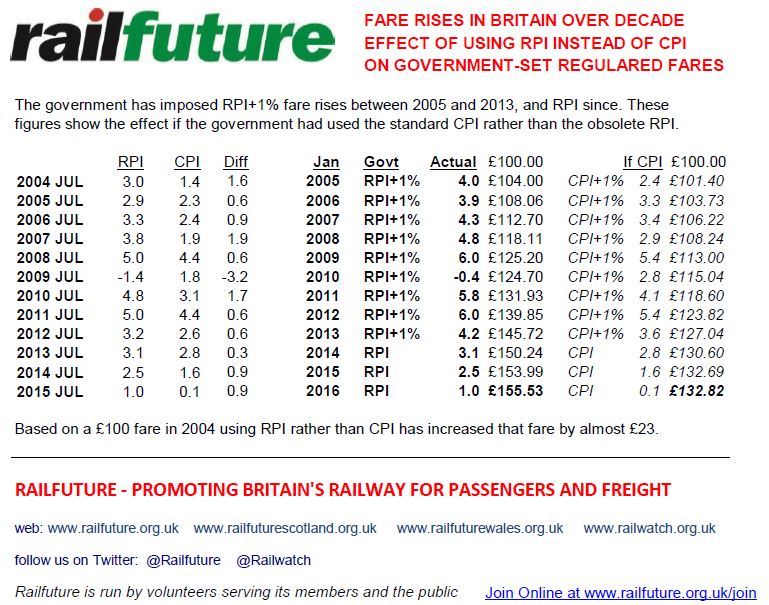 Elsewhere the government treats CPI. For example, after eight successive years of no increase in the BBC licence fee, it will be increased by CPI in 2017. Since the BBC’s staff cannot do their job without travelling the government is ironically, and foolishly, making the purchase of outputs from one public service (the national railway) more expensive for another part (the national broadcaster) to buy.

Why does RPI differ to CPI?

There are two reasons for this: the differing items included in the two ‘baskets’ and the mathematical calculation of the average increase.

Prices are then weighted according to how likely people are to buy them and in what quantities. CPI looks at the spending of everyone in the country whereas RPI excludes pensioners and the wealthy since it was primarily created to help set pay rises (i.e. prices affecting working-age people).

CPI attempts to take account of the changing behaviour by consumers when faced with price rises. Often they will buy less of something if its price goes up, and more if its price goes down. This is modelled using the geometric mean rather than the arithmetic mean. It is impossible for the former to ever be higher than the latter. According to the Office of National Statistics, this difference in averaging method is the largest contributing factor to the differences between the RPI and the CPI.

The only time that RPI has been less than CPI is when housing costs have dropped dramatically in a short period of time, last seen in 2009 when mortgage rates fell as the Bank of England base rate was lowered to 0.5%.

Why should rail fares use CPI rather than RPI?

There is some debate on the relative merits of both CPI and RPI, particularly because the measurements are trying to achieve different things. The usefulness or otherwise of each is really not the point.

Quite simply, the railway cannot become unaffordable. Passengers cannot keep spending an increasing proportion of their income on rail fares.

The government needs to have a single measurement that it uses for everything that it controls, so that fare increases (in effect, government income via a tax) are not higher than people’s income such as benefits and tax credits (government expenditure).

Of course, because it wants to see increasing use made of Britain’s railways, Railfuture would prefer to see a real-term fall in rail fares so that people can use the train more often. Indeed, with petrol prices having fallen, and fuel taxation not keeping in line with inflation, the railway is becoming less competitive with road – a situation that is not in Britain’s best interests.

What are the consequences for the rail industry if CPI is used?

If Railfuture is successful in persuading the government to use CPI rather than RPI then the railway will have less revenue per fare sold, but that need not mean less revenue over all.

On the only recent occasion when RPI was lower than CPI, as interest rates collapsed during 2009, regulated rail fares actually fell (by -0.4%), but would have increased under CPI. Passengers didn’t hear desperate pleas from the rail industry. Part of the reason is that staff salaries were based on RPI so their staff costs grew less than forecast.

When the Coalition government abandoned RPI+1% increases, reverting to RPI there was no outcry from the industry either. However, this is because the government creamed off the +1%, giving only a miniscule amount of it to the rail industry to compensate for driving some passengers off the railway.

Because RPI increases for regulated fares are written into the contracts then the government would have to top-up revenue by the difference between RPI and CPI (minus a little for growth resulting from lower fares) if it switched to CPI-based increases.

The potential losers are the open access operators since they exist outside franchise agreements (simply paying Network Rail to use the track) and are not entitled to compensation from the government. They do not set any regulated fares but they are obliged to carry passengers who have bought them (receiving a proportion of the fare). However, they also sell selection of their own fares and as they do not have a monopoly, unlike franchisees, have complete freedom over their own prices. Moreover, lower fares mean open access operators should benefit from increased passenger numbers and because all of the existing ones have the potential to run longer trains without infrastructure work being needed they can provide capacity as well.

Of course, the real issue is that the rail industry allows costs to rise (most salaries rise above RPI) because it has little incentive to keep them low, having benefited from passenger growth with little investment (see article). About half of all fares sold are unregulated ones and train operators have tended to increase them by similar amounts to the regulated ones. Operators (and the businesses in the supply chain) have therefore benefited from the higher RPI increases. Switching to CPI would force the industry to consider its costs for the first time. It has to, sooner or later, because the railway has no viable future as continual inflation-busting rises will drive people away.

Railfuture media spokesman Bruce Williamson has been interviewed on BBC radio stations about the fare rises. Listen to him on BBC Radio Wales and BBC Radio Wiltshire. Recordings of many radio interviews can be listened to by clicking HERE.