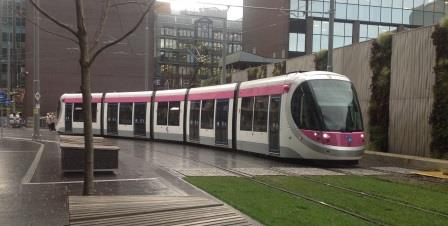 In a nine-day period in December 2015 passengers benefited from the opening of two tram extensions (the above photo shows the Midland Metro leaving Bull Street for Wolverhampton - by Ian Brown), two brand new stations, a relocated and much-improved station plus the resumption of train services through a re-bored and much larger tunnel allowing faster journeys and future electrification. It’s not a bad way to end 2015 – a year that also saw the longest ever rail reopening – and hopefully a sign of further progress in 2016.)
In the same time as Lady Jane Grey’s short reign lasted passengers in Britain saw a surge in rail facilities with six separate long-awaited schemes opened, all of which provide the kind of benefits needed to enable Britain’s twenty-year rail revival to continue.

Those rail-based schemes were as follows:


The Manchester Metrolink tram network has grown massively since 2008 such that there is no longer capacity for more trams to run through the city centre. It therefore became necessary to build a Second City Crossing (to bypass Market Street) and the first part of this was a short extension in the city centre to Exchange Square. Progress on the new link, which will merge back with the existing route in Lower Mosley Street beyond a rebuilt four-platform stop at St Peter’s Square is ahead of schedule. There is optimism that it could, like the tram extension to Manchester Airport did in 2014, open a year early in 2016, rather than 2017.

The one-platform station at Cranbrook and the larger two-platform one at Apperley Bridge both opened on the day of the annual timetable change – the second Sunday in December. Both had taken longer to complete than originally planned.

Rochester station was completely re-built, at a cost of around £26 million, and moved 500 metres to the west to be closer to the town centre and historic attractions. It can now cope better with passenger growth. In particular, the platforms were extended to allow 12-car trains to call for the first time (the old station supported a maximum of ten carriages). It is now part of an integrated transport hub making passengers’ end-to-end journeys better,

Normally tunnel works have little direct benefit to passengers.  The Farnsworth tunnel on the Manchester to Preston line had to be completely re-created (over a six-month period) as part of the electrification project, and is now much larger and straighter. This will enable trains to travel at 100mph in future.

In 2015 passengers benefited from expansion of both the heavy and light rail networks. These included the reopening of the Borders Railway and major extension of the Nottingham Tram system.

In 2016 the Midland Metro’s first ever extension will continue with two new stops reaching as far as Birmingham New Street station and works will continue on the extension beyond it to Centenary Square, whilst the planning process for further extension will continue. On the rail network a whole series of new stations should open including Bermuda Park, Coventry Arena, Ilkeston, Kenilworth, Kirkstall Forge, Lea Bridge, Low Moor and Marsh Barton with the largest being Cambridge North in East Anglia. Meanwhile much of the infrastructure work for Britain’s first Tram-Train System, between Sheffield and Rotherham, should take place.