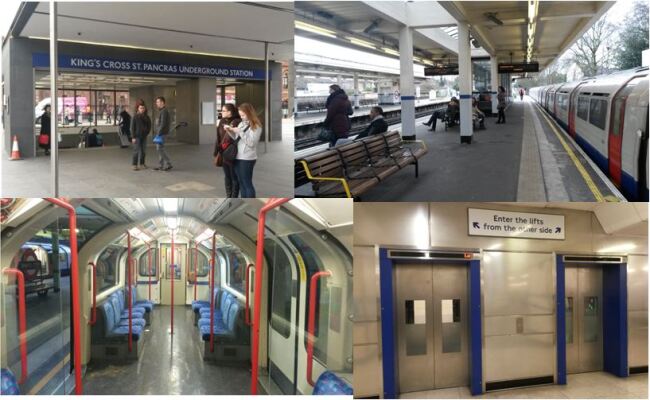 Annual passenger numbers on the London Underground grow each year and in December 2015 it had its busiest-ever day carrying 4.821 million passengers. Is the under-pressure system capable of carrying more, and if so, how? (Photo montage shows a new entrance at King’s Cross, Northfields station on a Sunday afternoon, interior of a Central Line carriage, passenger flow control around lifts at Heathrow Airport.)
Just as the ‘hottest year on record’ seems to be announced every year, London Underground (like its national rail sibling) also announces record patronage. On 4th December 2015 London Underground reported a record 4.821 million passengers for a single day.

In 2014/15 there were 1.305 billion passenger journeys making the London Underground the world’s 11th busiest metro system, yet it has the third largest system at 402km and 270 stations.

What has the world’s oldest metro system done to increase capacity to cope with record numbers and, given that London's population is set to grow from 8.6m in 2015 to around 10m by 2030, what opportunities does it have in the future? Railfuture director Jerry Alderson gives his views.

Behind the scenes LU continues to carry out a huge programme of modernisation with control systems being updated or replaced to provide more capacity, principally by allowing more trains to run on the existing tracks. Victoria Line passengers were the first to notice this, with the introduction of up to 32 trains per hour at peak times, meaning that it has more trains running on the line than platforms available for them to stop at. This increase in frequency is being rolled-out when other lines are modernised and new trains, capable of working with the new technology, are introduced into service.

New signalling systems are a one-off improvement as, beyond a little refinement, train frequency will reach its theoretical maximum. Something else must be done to meet demand.

With 45% of the London Underground routes in tunnels it will be incredibly, and prohibitively, expensive to expand the tunnel width to extend the platforms at each station on a line for longer trains or to re-bore tunnels (as recently done at Farnsworth Tunnel on the national rail network for electrification) so that wider trains can run.

New lines can, of course, be built to serve the capital. Crossrail 1 will fully open in 2019 to provide a new east-west rail service through London with a metro-style service and frequency, but it will have taken nine years to construct following a decade for the planning process. Public consultation has just finished for Crossrail 2, which could open in 2030 with a similar timescale for an extension to the Bakerloo Line. A short extension at the southern end of the Northern Line will open by 2020. However, extensions at the extremities inevitably increase demand at the centre and new lines do not solve a London-wide capacity issue.

A way needs to be found in the medium term to carry more passengers without creating more tunnels or running more trains.

The Victoria Line’s new trains, which were introduced in 2009, increased space for passengers by removing the two intermediate driver’s cabs. Instead of coupling together two four-car trains each with cabs at both ends, they now operate eight-car trains, hence the reduction from four to two cabs per train. However, valuable space is still wasted between the carriages.

Construction was completed in late 2015 on the new Metropolitan (S8) trains, with shorter (S7) variants used on the District, Circle and Hammersmith & City lines. These have ‘snake-like’ continuous walkways normally associated with modern trams. Similar trains are used in many other metro systems (e.g. Stockholm, Brussels and Vienna). They has two advantages: passengers can stand in the ‘bendy’ sections between carriages, thus creating more space, and they can also walk through the train (if it’s not too crowded) to be closer to the station exit potentially reducing platform congestion.

Not all underground station platforms are quite long enough for the entire train, necessitating passengers to use the front doors of the last carriage that is partly inside the tunnel. With conventional trains only part of the rear carriage could be in the tunnel but with walk-through trains there is potential for the whole of the last carriage to be in the tunnel, therefore allowing longer trains to run. Of course, passenger education is vital so information systems and multi-lingual information signs must be provided.

Because of the need for the train driver to see that the platform is clear before starting, the front of the train is currently always in the platform.  However, if the driver is provided with CCTV screens in their cab that show a full view of the platform – hardly a technical challenge in these days of internet communication – and if illuminated ‘stop-point’ signage was erected in the tunnels then the front half (or perhaps the whole) of the front carriage could be in the tunnel, allowing even longer trains.

In the 2020s Transport for London (TfL) is proposing to introduce so–called ‘driverless’ trains, although remotely-driven is a more accurate term. It is intended to purchase trains with cabs at both ends but remove them later on, once an entire line is remotely controlled. The removal of both cabs would create space for another four seats plus a standing area at each end.

Filling trains with extra people creates a problem at the stations. It must be possible for more people to board and alight quickly without increasing the dwell time of those trains.

The introduction of Oyster cards in 2003, and the support of contactless credit/debit cards in 2014, has allowed passengers to pass through barriers much faster than with paper tickets. Although speed and scalability of smartcard processing was technically challenging, it was relatively cheap to introduce. Reconfiguring and expanding the passenger areas at stations is not.

London Underground has been creating additional entrances at stations and along with new exits at the other end of the platform. King’s Cross/St Pancras station is a good example, but the full works cost around £400 million. A similar enhancement will see Victoria underground station transformed. Green Park station has been given a new, sloped, entrance from the park, primarily to improve accessibility for wheelchair users.  Stations such as Tottenham Court Road will be transformed by with their new integrated Crossrail entrances. At Bank station a new tunnelled walking route between lines is being constructed. However, just like improvements for accessibility, it will take decades to address all of the stations.

It is possible to make better use of the space at stations without any infrastructure changes simply by changing passenger behaviour. Britain introduced the concept of standing in the right of escalators allowing passengers in a hurry to walk on the left-had side. However, this tends to waste a lot of space and some countries encourage passengers to stand on both sides.

In the very short-term there is one way to enable passenger numbers to increase further without providing any infrastructure changes. This is to allow trains to run for more hours of the day.

Currently limited to around 20 hours because of the need for maintenance work (including clearing litter discarded at stations and blown into the tunnels, to avoid fires), TfL plans to introduce, hopefully in 2016, all-night running at the weekends (marketed as the Night Tube) on modernised lines (see map below) . Over time this will be rolled-out to all lines. There may even be potential to operate for more hours on other nights of the week but unlike other metro systems that have been designed for it, such as in Copenhagen, the London underground (with the exception of brand new lines) will probably never be capable of 24/7 operation.

A map from Transport for London showing the lines that would be part of the first phase of the Night Tube.

UPDATE: Since this article was written TfL has trialled standing on both sides of the escalators at Holborn station. This is mentioned in a Guardian article in January 2016.