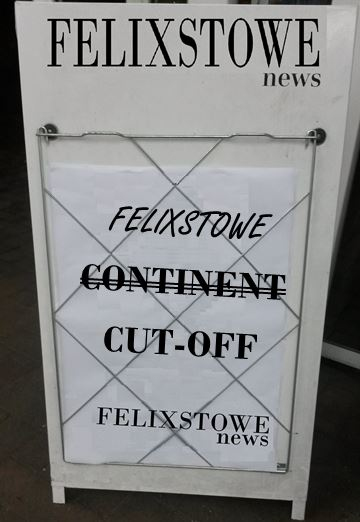 In the 1930s a newspaper once used the now-famous phrase “Fog in channel - Continent cut off”. In November for 12 days residents of Felixstowe were feeling rather “cut-off’ as their train service was temporarily abandoned by train operator Abellio Greater Anglia, which has a desperate shortage of fit-for-use diesel trains and this was exacerbated at the time by the ‘autumn leaf-fall’. This mocked-up newspaper display stand gives an indication of how seriously stakeholders are treating this complete failure to provide a contacted service.

Railfuture shows their complaints and includes a communication from Abellio Greater Anglia to give reasons why they had utterly failed to deliver the contracted service. Now that almost all leaves have fallen the service is back to normal but only time will tell how much damage has been done to passenger confidence and short-term patronage.
An Unprecedented and Catastrophic Train Service Failure

That’s the description given by Railfuture in its November 2015 edition of RAIL EAST magazine (page 2) when Abellio Greater Anglia totally abandoned services on two rail lines (Ipswich-Felixstowe and Marks Tey-Sudbury) and drastically pruned the service on other routes (such as Ipswich-Peterborough and Norwich-Great Yarmouth) between 11 and 22 November 2015. As an organisation that works tirelessly to promote a bigger and better railway it is galling to Railfuture that the rail industry, and the government upon which it relies so heavily, inflicts so much harm upon itself.

Other stakeholders including Rail User Groups made formal complaints, and we repeat two of their complaints in full below. Although we had been sent the complaints at the time we held back publishing them in the expectation of a formal response that could be published. Moreover, passenger groups hoped that evidence would be provided to demonstrate that such a ‘catastrophic train failure’ would not occur in 2016. Sadly, the rail industry and the government that funds it, gives the appearance of relying on hope that the leaves will fall over a longer period of time, rather than 53% of them falling in just two weeks, leading to wheel damage on sliding trains.

At the time of writing the industry is rather silent as the three bidders for new franchise, beginning in October 2016, are about to submit their final responses to the Department for Transport. Rail campaigners will be waiting eagerly for the award to see if anything is proposed to provide a resilient train service in the future.
Felixstowe Travel Watch wrote to the Office of Rail and Road on 22 November 2015

They wrote because Abellio Greater Anglia was failing to deliver its contracted service However, the ORR passed it onto the DfT as they considered it a franchising matter. FTW's letter said:

Felixstowe Travel Watch, which was formed in 1972, is committed to promote vigorously the usage of public transport in the Felixstowe area.

You may be aware that the franchisee, Abellio Greater Anglia, has suspended rail passenger services from Ipswich to Felixstowe from Wednesday 11 November until at least Sunday 22 November inclusive.   Other services, such as Marks Tey to Sudbury, Norwich to Great Yarmouth and (partially) Ipswich to Peterborough have also been suspended until at least the same date.

Throughout most of this period, the suspension was notified to the public on a day by day basis, with its extension to 22 November only being confirmed on Wednesday 18 November.

It is noted that the current franchise agreement, as regards the obligations of the franchisee in the event of disruption by railway passenger services, requires the franchisee to ‘notify the Secretary of State promptly where such disruption would materially (having regard to both duration and scale) prejudice the Franchisee’s ability to deliver the Timetable or deliver the Timetable in accordance with the Train Plan’. (Sch 1.2.  s 8.1.(a)).

In view of the extensive disruption caused by the peremptory cancellation of rail services on the Ipswich to Felixstowe line, during the course of which at least 324 single journeys have been cancelled since 1 November to date, and also the suspension of rail services on other lines, notably Marks Tey to Sudbury, which has suffered a similar number of cancellations, please advise us as to whether the Secretary of State has been notified as required above, and if so, what action was taken.

We also note that, as regards the alternative transport arrangements which are required to be provided where such services are disrupted, that ‘such alternative services are of reasonable quality ....to the Passenger Services included in the Timetable which such arrangements replace and reasonably fit for the purpose of the journey to be undertaken’ (Sch 1.2. s 8.2 (a)).

The majority of replacement vehicles operating between Ipswich and Felixstowe, whilst being reasonably comfortable, are quite elderly and have high, narrow steps, poor lighting and no grab rails.  In addition, there is no provision for the conveyance of prams and very limited space for cycles.

There is normally a significant amount of demand on this line for these items to be conveyed.

Having regard to the above matters, we shall be grateful if you will indicate what regulatory action has been taken or is proposed to be taken to oblige the franchisee to attempt to repair the reputational damage which it has caused by virtue of its failure to provide rail passenger services over this period.
Councillor Smart wrote to the informed rail media as follows:

The floods and storms at Workington (2009) and Dawlish (2014) were a dramatic reminder of the impact the elements can inflict on rail services. In both cases the response by the ‘orange army’ was equally dramatic and impressive.

Yet the elements that suspended services on the Felixstowe branch for twelve days in November 2015 were mostly man-made, the weather playing a relatively minor role.

The mild and late autumn gave rise to a delayed, and more concentrated, leaf-fall season and despite the deployment of rail head treatment trains (RHTT) around the East Anglia rail network, the poor rail conditions resulted in wheel damage to the Abellio Greater Anglia (AGA) DMU fleet. Their consequential withdrawal for repairs lead to a spate of seemingly random cancellations affecting services on the Mid Anglia, East Suffolk, Breckland, Felixstowe and Sudbury lines throughout the first week of November. As the situation deteriorated AGA withdrew services altogether on the Felixstowe and Sudbury lines from 11th November, extending to the Yarmouth and Ipswich-Peterborough services on 19th.

The response to this crisis was rather limited. Crown Point depot has no wheel lathe so units were sent to Ilford or Derby for tyre turning. The TOC were unable to borrow units from other operators who were under similar pressure with nothing in reserve.

This episode asks some awkward questions about who takes the risk in the franchised railway.

The ‘direct award’ that followed the west coast debacle delayed the ordering of more rolling stock to meet growing demand. Is it time we separated train buying from the awarding of franchises?

Why can’t ROSCOs operate like your local garage and hold sufficient spare vehicles to lend you one while yours is in for service?

Will the DfT ensure the next Anglia Franchise is adequately resourced, or will it be awarded to the lowest bidder?

As things are, the risk is simply passed on to the long suffering passenger.
Background

We have 26 diesel trains to operate the local routes across Suffolk, Norfolk and Cambridgeshire, plus the Marks Tey to Sudbury line, and the timetable plan is based on up to five trains being on maintenance or repair at any one time. At some points this week we have had up to a further five trains out of service as a direct result of wheel damage caused by poor railhead conditions, despite the fact that we have hired an additional train set for use on local services. This is unprecedented, as in no previous autumn has the impact been so serious.

The reason why the conditions can result in problems (though not usually as dramatic as this year) is because during the autumn season, fallen leaves stick to damp rails, which are then compressed by trains into a thin, Teflon-like, layer on the rails causing the wheels on the train to spin or slide. If the railhead conditions are particularly poor it can lead to excessive wear on - or damage to - the wheels, which must be repaired before the trains can re-enter service.

As this is a known problem, there is an extensive programme of preventative work carried out every autumn to try and minimise the impact of the poor railhead conditions. Network Rail track teams work around the clock at key locations using "de-scaling" machines to clean the railheads. They also operate "rail-head treatment trains" to clean the rails using water jets and then apply a sand-based gel to help trains gain traction. Our trains also have equipment which applies ultra-fine dried sand ahead of the train’s wheels to improve traction when braking or accelerating. Drivers use the sand in the known “hot spot” areas to improve adhesion. Despite all these initiatives, the conditions can still be challenging (especially in the early mornings), thereby causing damage to train wheels. In addition, on routes where the problems are known to cause delays, an amended timetable is put in place for early morning trains to minimise the impact on service reliability.

However, despite all these efforts, this autumn is proving more difficult than any previous one in terms of its impact on our diesel train fleet.

We have sought to minimise the cancellations through a combination of additional repairs, extra slots on the wheel lathe where the wheels are repaired and revisions to the daily deployment plans for the trains, to limit the disruption as far as possible.  Even with all these actions, the conditions have been so difficult that as quickly as trains have been returned to service, other ones have been needing repair. With between three and five additional trains needing repair it was necessary to introduce a bus replacement service on the Ipswich to Felixstowe and Marks Tey to Sudbury lines.  This decision was taken because these were the two routes for which it was more practical to run a reliable bus alternative which would give customers a clear and consistent revised service. Trying to provide such an alternative on the longer routes was both less practical and less reliable. We have also hired additional buses and used taxis as appropriate to cover for other cancellations where practical.

Actions being taken to restore a normal service

As well as the additional repairs, extra slots on the wheel lathe where the wheels are repaired and revisions to the daily deployment plans for the trains, we are also undertaking other initiatives to try and improve the situation including:
Railfuture acknowledges that the Greater Anglia franchise is somewhat of a poisoned chalice, with decades of disinvestment while the railway was seen as a declining industry and inadequate investment in the last 20 years of sustained growth. However, despite having sympathy for Abellio’s predicament, RAIL EAST posed the questions asked by passengers, not least: why the terrible shortage of usable trains has been allowed to develop so critically:
Ian Brown, Railfuture’s director of Policy, has been consistently calling for new diesel passenger trains to be built immediately to solve the shortage of trains that has turned into a nationwide crisis because of the relentless increase in demand for train travel in Britain. He commented on the complaints, writing:

“The current DfT competitive franchising process does not encourage bidders to provide spare cover above day-to-day maintenance quotas. To provide this within each franchise would mean quite a change. The answer is a new build of dmus as we have been campaigning for over a long time so that rail can cope with traffic growth with proper margins for maintenance and repair. This is now even more urgent given the collapse of the electrification programme so slowing the already inadequate cascade.