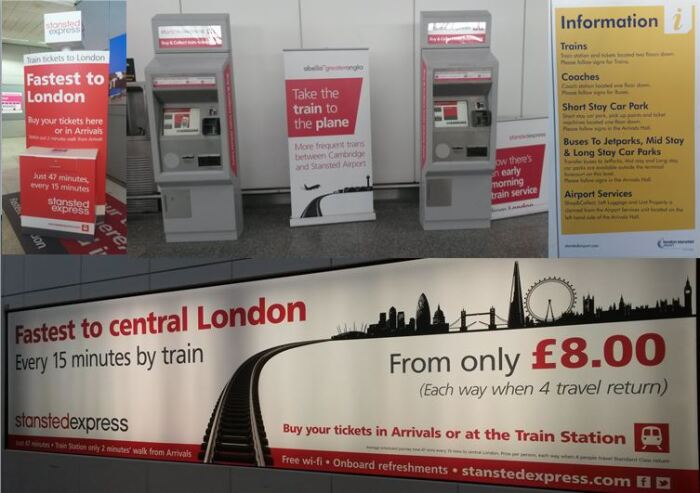 Some of the advertising for the rail service ‘air side’ for arriving passengers.

Railfuture campaigns for a bigger and better railway. That will only happen if passengers use the railway in sufficient numbers to justify investment. With an attractive and value-for-money service that should be easy but too often the rail industry does itself no favours when it offers a poor customer experience, or just forgets some really simple things, and fails to seize opportunities to market its service.

In the past Railfuture has undertaken an “Airport Links” study to look at how well it is to get to airports in Britain by rail, but passenger expectations are rising all the time. Railfuture director Jerry Alderson recently used the train between Cambridge and Stansted Airport when making a short holiday abroad. He considers whether those expectations are being met, and recounts his rail experience in a ‘blow-by-blow’ account of where the railway (and the airport) is falling short.

It was not a good day to travel. The rain was bucketing down. The area around Cambridge station is being redeveloped but the taxi was able to pull up within six metres of the entrance to the station booking hall. Even so, there is no canopy unlike under which the taxi could stop. The listed building status probably prevents one being erected at the entrance. A few seconds in the rain isn’t too bad, but pity the poor people queueing up at the taxi rank. Railfuture has defined standards for a good passenger-friendly station and when responding to the consultation on the new Cambridge North station it called for the station to have cover from the rain from the front entrance to train door. It’s the least to expect, but at Cambridge station platforms 2 and 5 have no canopies, whilst 1, 3, 4 and 6 have only partial cover.

Of the four fairly-new ticket machines two were displaying a “Not in service” message on the screen, so the queue was longer than it should have been, although many travellers may have been queuing in the temporary ticket office in place whilst the main ticket hall is being enlarged. Returning from holiday several days later, one of the two faulty machines was still showing the out-of-service message. Had it really been out of service all that time?

As it was a Bank Holiday the off-peak return ticket (£14.80) had two options for a Network Card discount - £13.00 if returning on a weekday (Mon-Fri) or £9.75 (if returning at the weekend (Sat-Sun). However, the machine did not explain why there were two options and how they differed. Many people would, surely, choose the cheaper of the two fares. Had they done so, and returned on a weekday, would the guard have spotted it and would the ticket barriers have accepted it? It has to be said, though, that the undiscounted off-peak fare was good value compared to alternative travel modes.

Waiting for the train

Walking over the footbridge that was built in 2012, introduced to serve the new £16m island platforms, the floor was wet because of a leak in the roof. Large expense doesn’t buy quality, it seems.

As there are no facilities on the new island platform it was necessary to buy a coffee on the main platform (where there are five kiosks selling hot drinks) and then carry the hot drink up the stairs and down the other side (or take the lift). It’s a lot of trouble to go back if you’ve forgotten the sugar!

It was reassuring to have a large information screen showing the schedule flight departures from Stansted Airport. However, all it really did was to confirm the departure time as all of the flights showed the same unhelpful status of “scheduled” (see photo below). There was no evidence that it was a real-time display since at 10:00 the earliest flight it showed was for 11:35. Presumably this was deliberate to show only those flights that could be caught with certainty if departing on the next train (10:10). It is difficult to decide what cut-off time to use; however, a train passenger arriving on time at 10:40 who had checked-in online, had only hand luggage and knew the airport well could have just caught an 11:20 flight.

The good news is that the train, from Birmingham, departed Cambridge on-time and arrived at Stansted on-time.

There was a crew change with a new driver and guard getting on. Apart from giving ‘right away’ at Audley end station (the only intermediate stop) the guard was not seen, so all tickets went unchecked. In fact, this was the case on the return journey too. The lack of on-board ticket checks by staff who seem to ‘hide’ from passengers is something that Railfuture and most rail user groups frequently complain about. If nothing else it would be a chance for passengers to ask questions.

If you have arrived on a train from London then you’ll enter the warm, dry and brightly-lit underground station. However, from the Cambridge direction you’ll be arriving into a short four-carriage bay platform 2 that is exposed to the elements. Part of the reason is that diesel trains operate there and ventilation would be inadequate if fully covered, but a canopy over the platform only would be fine.

With no protection from the pouring rain the solution was to walk through the entire length of the train to keep dry. This is possible if you only have a small bag or a rucksack but not with large luggage to navigate through the narrow aisles and connecting doors. Or if you are in a wheelchair! The disabled discrimination laws, it seems, gives them the right to board a train but not to the same level of comfort.

When Stansted Airport railway station opened in 1991 far fewer people arrived by train. Today with regular 12-coach trains from London it can get crowded. Add to that the CrossCountry train that had just arrived and then close one of the two escalators, as they had, and a queue of 100 people is soon waiting to leave the platform. Despite there being a different entrance for departing passengers, the underground station really could do with another escalator or more lifts for those arriving. There is a ramp (shown amongst the photos below) but that is blocked off as it is also an entrance as well as an exit and could lead to ticketless travel (though not if it was properly managed).

If someone had just arrived by car, coach or taxi at the airport it is unlikely that they would even notice that it had a railway station, which is hidden away underground. There are no signs from the outside and you really need to hunt to find the station from airport concourse. However, it is a very different story when you are arriving off your aeroplane.

Alighting the inter-terminal shuttle (it’s not only rail services that are short-formed; the shuttle consisted of only one vehicle both outward and returning for no apparent reason) you have to walk past several signs for the railway. Despite Stansted Airport having to be ‘impartial’ when it comes to promoting services – National Express would be upset if the railway was promoted more than coaches – there are at least four occasions that you’ll see advertising for the Stansted Express train to London, but nothing else. What about the trains going to Cambridge (Ely, March Peterborough, Leicester and Birmingham)? While waiting for your luggage to come off the carousel you might notice the ticket machines and the small sign mentioning the improved service to Cambridge. If not, you may think that the only way to get there is by coach or taxi.

So, you’ve bought your ticket, now where’s the station? A large red and white ‘BR’ double-arrow sign would be very helpful.

Fortunately, the small train departure screen is a clue, but not particularly reassuring. The display showed the three next services but not the Cambridge service at 17:27 even though there’s plenty of room on the screen. As you descend the escalators to platform level it finally tells you that there are trains to Cambridge.

It seems that the station operator doesn’t care much about the revenue from trips to Cambridge and beyond. There was a human ticket check ‘gate’ at platform level before you could reach the trains. However, simply saying that you were going to Cambridge was enough to be allowed through. This is an open invitation to ticketless travel. At least there was ample opportunity to buy a ticket before them with five ticket machines and four positions at the ticket office.

Signs at platform 2 explained that passengers would not be able to board until 10 minutesw before departure time. Presumably this is to allow for cleaning if the train is arriving late from Birmingham, Fortunately it had arrived on time and passengers boarded 30 minutes before departure. What to do in that time? Well, probably not using the CrossCountry on-board Wi-Fi as it’s not cheap! The government has said that all trains should have Wi-Fi and it should be free in all classes. Railfuture definitely agrees with that.

The rail companies need to understand their passengers, many of whom will be visiting the country perhaps for the first time and may not have done thorough research. The rolling destination screens referred to “Birmingham N St”, despite there being ample room for a longer name. Let’s hope no-one interpreted this as “Birmingham North Station”. They could always follow the information notice inside the train and contact Passenger Focus to complain, except that it had changed its name to Transport Focus five months earlier!
Some photos taken during the journey between Cambridge and Stansted Airport.

A screen at Cambridge station (between platforms 2 and 3) shows flights leaving Stansted Airport around 90 or more minutes from now. Unfortunately there is a Windows popup error in the middle of the screen. There is another of these screens on platforms 7/8, where many Cross Country trains depart for Stansted Airport

At least this screen at the front of the Stansted Airport terminal gives the Cross Country as well as Stansted Express logo, but despite there being plenty of unused space on the screen it doesn't show the 17:27 to Birmingham calling at Cambridge, Ely and Peterborough amongst others that departs in only 50 minutes. A lost opportunity to raise awareness of the vital service.

When most of us are used to wide-screen television screens, why do they erect train displays with insufficient room to even spell out Liverpool?

Whilst the railway (to London) is mentioned 'air side' on the concourse there is just a small ticket office, which could be easily confused with coaches, and a single direction sign for "trains", with an information screen below it. Why is there no large rail 'double-arrow' sign?

There is no shortage of rail ticket machines at Stansted Airport, from the baggage carousel area, to the platform-level concourse where there is also a good ticket office

As well as the two escalators to take passengers up to the airport concourse, which cannot really cope with a 12-coach train full of people, there are also ramps but these are closed for revenue protection reasons

All new ticket machines around the world use computer screens and most support multiple languages (up to nine in some cases) but could in theory have 50 or more languages if the rail industry could be bothered, but the ticket conditions need to be understandable!


The screen is branded Stansted Express. Can you buy other tickets on it? Better try it and see.

All of the trolleys are advertising just the Stansted Express service. Would it make sense for some of them to advertise the services to Cambridge and beyond?

Stansted airport's platform 2 was used exclusively by diesel trains (although there are now electric trains from Cambridge as well) so ventilation is needed but a narrow canopy all the way to the platform end is not too much for passengers to expect.