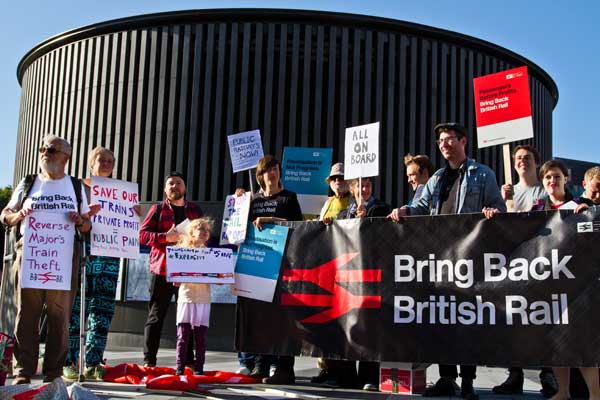 The annual fare rises, on 2nd January this year (see Railfuture press release), are always a major news story across the media, not least because of the importance of the railway to Britain’s economy. The announcement gives life to regular calls to renationalise the parts of the railway that haven’t already been renationalised. On 5th January the Bring Back British Rail campaign (see photo above supplied by them) will be staging events in support of their aim to do so.

Railfuture has a very clear position of the renationalisation debate, which is one of strict neutrality.

As an organisation that is independent of political parties, unions, train companies and so on, Railfuture campaigns for a better railway for all rail users, regardless of how it is delivered. We’re very specific on some of the key outputs that we want to see. We do not interfere with the running of the railway or stipulate how it should be run, although our expertise in many areas allows us to offer suggestions, ideas and advice. As a result Railfuture is able to command respect and campaign successfully with the rail industry, governments, agencies and political parties across the political spectrum.

However, many people think, not necessarily because of political beliefs, that nationalisation would deliver a better railway. Railfuture director Jerry Alderson considers what the ‘magic wand’ of renationalisation might mean for rail fares, and whether it would make any difference at all.

There is a widespread perception that train operators put up the fares to make bigger profits for themselves, and that a state-owned railway would not put up fares as much, if at all. However, the government creams off much of the extra revenue and hikes fares.

This year ‘regulated’ fares have risen by no more than the annual retail price index at July 2014 – 2.5%. RPI has fallen dramatically since then so the increase is higher than it would be if, say, the October 2014 rate was used. With number crunching to pre-programmed algorithms there is no reason why a more recent rate could not be used in future years.

Many fares were raised by that figure, which is set by government and not the train operators (TOCs). The government demands that the TOCs increase the fares by that much. The TOCs have no choice but to comply.

Where the TOCs have been allowed to set their own fares it has, on average, been lower than the 2.5% demanded by government. The overall average is about 2.2%, which means that unregulated fares rose by about 2% (allowing for the fact that the Scottish government prevented any rises on off-peak fares). Therefore the private companies have been responsible for less high increases than would, presumably, be the case if the government set every fare. Of course, this doesn’t mean that TOCs are saints, but reflects that the TOCs understand what the market will bear whereas the government (the current Coalition one and its Labour predecessor) appears to be intransigent.

Passengers have faced above inflation fares since 2004 when Labour’s Alistair Darling set the annual increase to RPI+1% (and RPI+3% for three years in the South East, which Darling introduced from 2007). This has continued because the government (both Labour and Coalition) wanted the passengers to pay an increasing proportion so that the tax payer contributes less. Although the government has removed the +1%, it still insists on using the higher – and generally obsolete - RPI measure of inflation rather than CPI, as Railfuture proposes, which is used for nearly everything else by the government.

In the north of England, where subsidies are higher for geographic and economic reasons, the Department for Transport forced the train company to impose evening restrictions on fares from summer 2014. This has led to passengers paying much higher fares.

It can seem that wherever the government is in charge of setting fares then passengers have to endure higher fares. If this is indeed the case then supporters of renationalisation might ask themselves why giving the government even more control will lead to lower fares.

The Bring Back British Rail campaign explained that they consider fare increases to be 'outrageous' because “the inefficiencies caused by privatisation are shown to be wasting £1.2 billion a year, which could be used to reduce fares by 20% (not increase them).”

Their argument that the railway costs far more than it should and passengers should not be made to pay more when huge cost savings could be made instead is one that many passengers would agree with.

The £1.2 billion figure they quote is at the top end of anyone’s calculations for the additional costs caused by industry fragmentation, and many commentators would suggest a much lower figure, especially after taking tax revenue into account.

However, the logical extension of that argument is that costs across the entire industry, regardless of cause, should be cut so that savings can be passed onto passengers and freight customers.

Some shareholders have done well from the privatisation of the railway. However, so have some rail employees.

Train drivers now cost more than £50k to employ (basic pay, NI, pension etc.) for a 35-hour week, with overtime (of up to double pay) on top. They are the highest paid workers in Britain where a university education is not required or even expected. Their salaries have more than doubled since BR days (and now get paid around 2.5 times a bus driver). They cost more than £700 million to employ. There have sometimes been 2,000 applications when jobs for train drivers are advertised. Clearly they are paid more than necessary to recruit them. If their salaries were reduced then savings could be passed on to passengers. However, the most vocal of those demanding renationalisation would probably be aghast at such a suggestion!

In reality, driver salaries would never be cut. However, bringing multiple train operators under state ownership would surely see a consolidation of operations, and that would lead to job losses, including amongst drivers. Because train operators employ their own drivers (rather than sub-contracting them from a national ‘DriverCo’) then each operator needs excess drivers to cope with holidays, illness, leavers, and so on. With a larger pool then the number of spare drivers needed would reduce. Similar consolidation would occur in other roles.

So let’s assume that railway costs can be dramatically reduced, for whatever reasons, by how much would fares actually fall?

The answer is probably zero. Some would suggest it is incredibly naïve to believe that the government would reduce fares – surely it would reduce subsidy instead?

The government is running an annual deficit of around £90 billion, and once that is brought down to nothing (2018 at the earliest, and few believe it will be that early) there will then be a £1.7 trillion accumulated debt to start paying down. When passengers have put up with sustained increases over a decade, and demand has not fallen, is it likely that the government would choose to pass on significant savings to passengers rather than use it to lower the deficit and eventually pay off the debt or support other vital services?