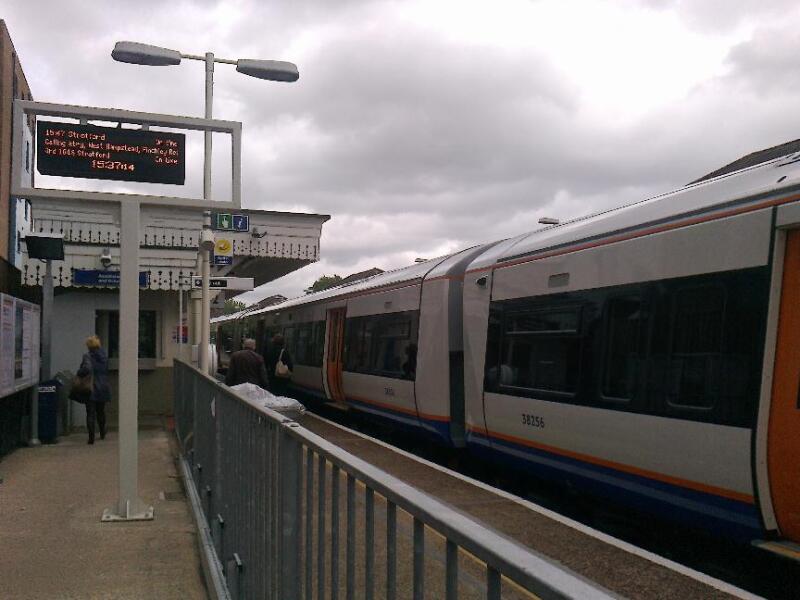 At its May 2014 AGM in Sheffield Railfuture members heard from Mary Creagh, Shadow Secretary of State for Transport, about Labour’s plans to allow the British public sector (its existing wholly-owned subsidiary, Directly Owned Railways Ltd) to bid for rail franchises. Reaction to the ‘Pubsect’ proposal within the Labour party, many of whom wanted automatic renationalisation when franchises ended, was generally negative – see Labour gets it wrong (9th July 2014).

Section 25 of the Railways Act 1993 currently prevents any British public-sector company from operating passenger train services. It may have been purely political dogma or a belief that it was impossible to devise a system that fairly allows commercial and state companies to compete without endless disputes being played out in the courts.

Transport writer and broadcaster, Christian Wolmar, who is also Railfuture’s President and was present at that AGM, followed Mary Creagh around at the recent Labour Party Conference. In his latest column for RAIL Magazine (issue 758, 1st-14th October 2014) he condemned the plan as “unworkable and will lead to a political furore, alienate the train companies and waste money.”

Railfuture director Jerry Alderson considers the practicality of a level playing field between public and private sectors when bidding for franchises, and whether the change is really worth the effort.

Public sector already runs much of our railway

Some might wonder why Labour and others, such as the Green Party, are so exercised over the railway in Britain given that it is already primarily owned and driven by the state.

Network Rail, which owns and operates the railway network, is an arms-length state-owned company.  The Department for Transport specifies in great detail what franchisees do, and sets fare increases too. The state created the Office of Rail Regulation to monitor train companies and even the passengers’ champion, Passenger Focus, is 100% funded and has every board member appointed by the state. Currently the British state runs one train service, East Coast, since National Express abandoned its franchise when times became tough; however, several other states (those in Germany, France and the Netherlands) run about half of the other 18.

The train operators’ association, the Rail Delivery Group, says that train operators take only about 3% of their income (fares, subsidy and compensation) as profit, although caution is needed as occasionally some profit can be disguised as operating costs (e.g. brand licensing and allocated costs for headquarters and executives).

In a presentation to Railfuture in September 2014, Abellio Greater Anglia’s Managing Director, Jamie Burles, said that his company had only received £4m in 2.5 years despite the franchise being highly profitable – the government takes nearly all profit.

In the renationalisation debate the freight sector is usually forgotten. In fact part of it is already nationalised.

In the 1990s the government chose not to privatise British Rail’s nuclear flask movements. Instead it created a new state-owned company, Direct Rail Services (DRS). Initially DRS operated just nuclear traffic but had spare capacity. It now competes with other operators to carry some niche traffic and also provides facilities for Network Rail such as railhead treatment trains. DRS runs without government interference and has not faced criticism by its privately-owned competitors. However, it is small, has not sought major expansion, does not act aggressively, and is not a significant threat.

Public and private sector competition in other industries

Britain’s most widely known, respected, and successful state-owned (but not state run) company (actually a corporation), which operates in fierce competition with the commercial sector, is the BBC.

It has faced criticism from its competitors about state-subsidised commercial activities. When listings magazines were deregulated in 1991, its on-air promotion for Radio Times was challenged. The parodied “other listings magazines are available” cop-out emerged. Today the BBC cannot promote anything on air for fear of legal challenge. It is more restricted than its rivals, who exploit cross-promotion.

The BBC is probably the closest example of how a public-sector rail company might compete with privately-owned train companies.

In the 1980s the Conservative government was eager to break the ‘duopoly’ between public BBC and private ITV. Following its very successful creation of a new state-owned company, Channel Four, which pioneered public procurement with private delivery in broadcasting, the government forced both broadcasters to source 25% of their programming from small private producers. Today the BBC still faces the 25% rule but viewers will notice that many programmes are independent productions.

Whilst 50% of BBC television output is guaranteed in-house production (mainly news and current affairs, but also its copyright shows such as EastEnders and Doctor Who) the BBC’s Window of Creative Competition (WoCC) sees BBC in-house production competing with independent companies for the remaining 25% of air time.

The fundamental difference between WoCC and what Labour is proposing for the railway is that the BBC does not tightly specify the requirements and then get both in-house and externals to bid to produce exactly the same thing. Instead the BBC programme commissioners would suggest at high-level a strand such as “6 x 30-minute peak-time music light-entertainment programme for mature audience.” BBC in-house might enter into discussion with Tom Jones’ management and attract American guests whilst an independent proposes Shirley Bassey and British guests.

The key difference here is the parties are giving their own vastly different ideas and if successful will go away to produce it using whatever facilities and talent they choose. The BBC needs a certain amount of independent production because it cannot source all the skills that it needs – range and quality would certainly suffer without them. Therefore the independent sector, which might be unhappy with the total proportion it can bid for (50% of output) and budget available, is completely trusting of the competition process, even though the BBC has a financial advantage over in-house productions in that it would retain rather than lose the copyright.

Rail franchises are an entirely different beast. Regardless of which bidder wins, 98% of the staff will remain in place doing the same role. The stations, trains and practically everything will be the same. The bidders will bring in some senior management and will have their own style and approach, but there really is little that separates their bids. The real difference is how much margin each bidder is willing to sacrifice and how much risk they will bear. Being blunt, it’s about how desperate they are to be involved in the rail industry.

Trust in the bidding process

Unlike the BBC commissioning process, where little development cost is required to submit an initial proposal and a losing bidder owns their idea and could tout it to other broadcasters, the bidders for a rail franchise could easily spend £7m, which will be totally wasted money if they do not succeed. They currently have at best a one in three chance of succeeding. That is a risk worth taking if it is a fair competition.

During the infamous West Coast franchise debacle in 2012 the DfT, which is the servant of the Treasury, received four private sector bids to judge. In choosing the winner it should have been impartial, looking out for best value for fare-payer and tax-payer, but many believed an “anyone but Virgin” hidden agenda existed. The result bore this out. If the DfT could not be trusted then, why should it be trusted when one of the bidders is a subsidiary of itself?

The Office of Rail Regulation (ORR) could be given the role of evaluating the bids and choosing the winner. It certainly commands more respect than the DfT, and it has shown its independence in the past.

The ORR has been a thorn in the side of the government (and Treasury) when it has, on a few occasions, granted permission for open-access operators to run services in direct competition with franchisees. It faced, and won, a legal challenge by GNER (perhaps with behind-the-scenes encouragement from the DfT) when granting (after a protracted series of applications) a licence to the, now, very highly-regarded Grand Central.

So let’s assume that the private sector has trust in the ORR (or a brand new body) to operate a fair contest. What next?

What if the public sector fails to win?

If a private company loses £7m then its shareholders lose, but they are used go gambling. That is what shareholders do. It’s acceptable.

When a public body loses £7m – and Freedom of Information requests will reveal that loss - it will be criticised by the media for incompetence either by putting in a poor bid or taking part when it made no sense. How will the loss be paid - from transport, education, welfare or health budgets?

One loss is acceptable but what will the public reaction be if it loses a series or all bids?

Why should the public sector fail to win?

The private sector will be more expensive and therefore less competitive since it has to pay its ‘greedy’ shareholders. Because the public sector would pay no-one, it only has to beat the level of premium or subsidy.  It’s a guaranteed winner, surely!

The amount of profit paid to shareholders is very small indeed, because franchisees invest virtually nothing and face only a limited risk. The above argument doesn’t hold. The financial part of the franchise bid will be determined on predictions of fares income and ability to manage costs, not shareholder dividends.

The public sector’s hands are tied in many ways. It cannot afford a highly talented team of railway experts to manage its bid as they would command high salaries way beyond the civil service pay scale. It cannot get the same economy of scale, either because it doesn’t own other assets or competition law prevents it. A private operator can share resources and overheads between its train and bus subsidiaries, or between its operations in other countries. A private operator has more freedom to build relationships with other businesses, such as awarding air miles for rail trips.

Britain’s passenger railway in the future

Even if the public sector does win such a competition, no-one has explained how the simple change of ownership, and nothing else, would lead to a better service for passengers, which is what Railfuture actively campaigns for.

It’s very easy for people to say that private companies care only about their shareholders whilst the public sector always puts the public first. The flaw in this argument is that half of Britain’s franchisees are owned by the public sector in other European companies and yet the publicly-owned Arriva, Abellio, Keolis franchisees have a very similar performance and reputation to the private-sector Stagecoach and First Group.

Many would argue that it’s not ownership that matters but having a sensible structure, with appropriate motivation, that is capable of delivering a high-quality, forward-looking, modern, customer-focused, value-for-money, reliable and resilient railway.

Some would suggest that, in certain well-defined areas where regional government is capable of taking responsibility for the railways, that using the most appropriate model – concession rather than franchise – would best deliver those aspirations.