Eurostar held back by tatty trains and poor connections 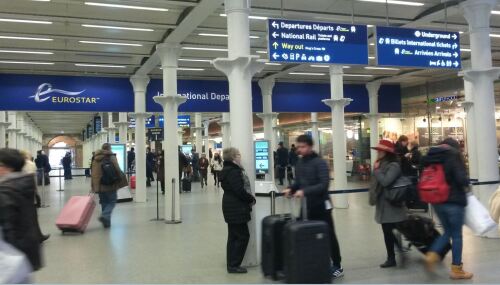 New research by campaign group Railfuture has highlighted two major areas of concern for passengers travelling on Eurostar  — outdated trains with shabby interiors, and the lack of integration for onward travel.  "The good news is that the new Velaro trains will enter service later this year, so that first problem is already being addressed" said Bruce Williamson from Railfuture.  "However, there is a real lack of joined-up thinking when it comes to through ticketing and connections for passengers who want to travel beyond London, Brussels or Paris"

For 12 months up to June 30th this year, Railfuture asked its members and website visitors to complete a 10-part questionnaire whenever they travelled by Eurostar.

Many passengers cited poor connections and the lack of direct services as problems when travelling to destinations beyond Paris, Lille or Brussels. "One of the things we asked about in our survey is onward travel, which is a weakness as Eurostar seems to be only interested in its own routes, despite the fact that it is part-owned by SNCF. We're trying to get people to take the train all the way to their destination.  Simpler through ticketing for destinations beyond Paris in Brussels is definitely needed"

More than half of the people responding to the Railfuture survey (52%) described the rolling stock as “tired and tatty”.

"Passenger expectations have risen in the 20 years since Eurostar launched. The old trains need to be revamped to meet today's customer standards, including things such as wi-fi, power points and information screens."

A total of 225 journeys were surveyed, of which 76% were for leisure, and more were using Eurostar as the first stage of a longer journey to Continental Europe than in 2011, when Railfuture last conducted such a survey. Only 19% had Paris as their final destination and 7% Brussels; while 27% were heading to other destinations in France and 22% to Germany.

"We undertook this research because we want more people to use Eurostar and we want to help improve the service to passengers.  It will help us with our ongoing dialogue with Eurostar and we can use it as a campaigning tool to improve international rail travel between the UK and the continent. We're looking at it from the passengers perspective rather than Eurostar's commercial perspective."

A significant minority (31%) saw the time taken to clear security and passport checks as a disincentive to travel. Some negative comments were also made about facilities at Paris Gare du Nord, but work has now begun on improvements there, due to be completed in summer 2016.

The report can be downloaded at http://www.railfuture.org.uk/DL1088

Further comment on the Eurostar survey can be found at http://www.railfuture.org.uk/article1606-Eurostar-snapshot-survey